Aside from allowing you to configure volumes through code, Game Framework provides an extendable in game settings window that allows players to control the desired volume along as other settings. The Getting Started Tutorial runs through how you can easily add this to your game. 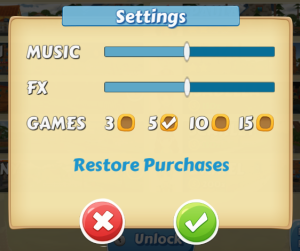 While you can access the audiosources directly on GameManager as shown above, there are also helper methods and components for controlling the audio.

The GameManager PlayEffect method can be used for easily playing an audio effect in accordance with current volume settings etc.

The StartStopBackgroundMusic component can be used to provide actions for the background music so that it can be automatically started / stopped in the components Enable / Disable states. This could for example be used to easily play title music when entering the title screen, and stopping it when you start the game

If you have seperate AudioSources for other background or audio effects then you can add the CopyBackgroundVolume and CopyGlobalEffectVolume components respectivley to the same gameobject as the AudioSource to have the global effect volume automatically set on the AudioSource.

If you have any thoughts or suggestions on improvements or additions to the Audio features then please let us know!