Game Framework provides several useful scripts and components for working with and setting up animations, focusing on user interface and usability aspects of your game.

The ShowValueAnimated and ShowValueAnimatedMessaging  base components allow for the display in a UI of values that are automatically animated when their value increases or decreases. Many components inherit from these to support such functionality (e.g. ShowScore, ShowLives). Separate animations can be provided for increases or decreases to values. Due to the fact that animations don’t complete immediately such updates can be either triggered immediately, aggregated or queued.

To setup such a component you need an animation that has triggers “Increased” and “Decreased” that play animations for increasing or decreasing values respectively. The animations that are played need Events adding that call the ShowValueAnimated derived components UpdateDisplay() method when the value should be changed, and it’s UpdateCompleted() method when the animation completes. 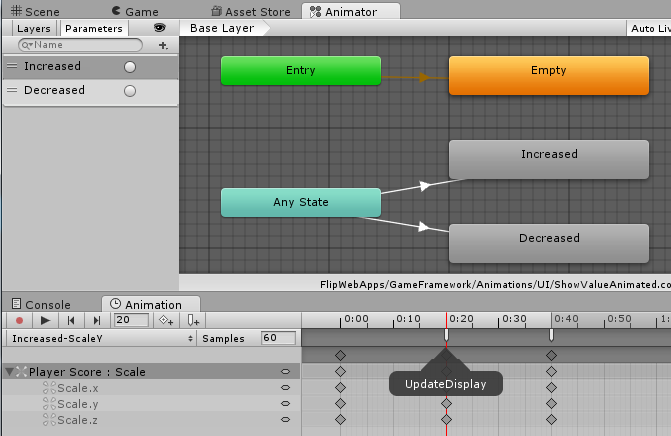 You should then add this to the same gameobject as the component and select it in the Animator field. Omitting an Animator will just cause the value to be updated immediately without any animations.

Note: Deriving from ShowValueAnimatedMessaging is preferred as it has better performance due to only being triggered when a corresponding update message is received rather than having to poll continuously for changes.

GameFrameworks lets you easily create dialogs of many different forms and also has the option to simply animate the contents of these. Please refer to the Free Prize tutorial for an example of how this works (part 2 focuses on animations).

It is very common to want to do things one time only during the lifetime of your game, the most common example being the first time that users experience something new. Examples could be guide them the first time they use your game or when they first enter a new level or area. Game Framework supports this in various forms both through dialogs and otherwise. For animation there are two components SetBoolOnce and SetTriggerOnce that can both be used for activating and triggering specific aspects of animations. Through the functionality exposed by the parent RunOnce component you can chain and link various actions

For other uses see also RunOnce and ShowDialogOnce which also inherit from RunOnceGameObject.

The SetAnimatorStartValues component allows you to dynamically set start values for an Animator.

If you have any thoughts or suggestions on improvements or additions to the Animation features then please let us know!